Why You Can't Taste Food & Drinks When You're Sick 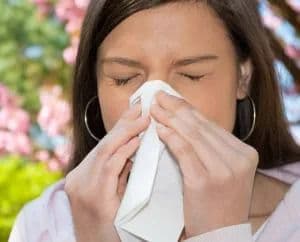 When we come down with a cold, oftentimes our senses of smell and taste get kicked to the curb. Although taste and smell are separate senses with their own receptors, they are closely intertwined. Your nose plays a big role in what flavors your tongue can identify, and when your nasal cavity becomes congested with mucus, it may leave food tasting as bland as a board.

On a basic level, it's helpful to think about it like this: The nose and the mouth are connected. Literally, the nasal and oral cavities run into each other. That's why the mucus clogging your nose nullifies the delicious and not-so-delicious flavors of food. This same mucus will also, most likely, cause bad breath that should be addressed.

Use TheraBreath PLUS Nasal-Sinus Drops:

Receptor cells in the mouth and nose
The tongue has thousands of taste buds that identify the four primary tastes - salty, sweet, sour and bitter - while the olfactory receptor cells in the nasal cavity measure odors that provide the sumptuous flavors in our food. These cells, when stimulated, send signals to specific areas of the brain, which make us conscious of the perception of taste. In this way, the messages that process taste and smell converge, giving us a more rounded idea of what we consume.

Chemicals in foods called tastants are detected by taste buds, the special structures embedded in the tongue. Every person has between 5,000 to 10,000 taste buds. Each bud consists of 50 to 100 specialized sensory cells, which become piqued by tastants like salts, sugars or acids.

Meanwhile, odorants, or odor molecules, are identified by the specialized sensory neurons in a small patch of mucus membranes lining the roof of the nose. To get these flavors - whether savory or not so savory - the odorants get stimulated by smells or chemicals in food that initiate a pattern of activity sent to the olfactory bulb. After passing to the primary olfactory cortex at the part of the frontal lobe in the brain, the message is relayed to adjacent parts of the orbital cortex where the combination of odor and taste information helps create the perception of flavor.

Mucus blockade
If mucus in your nasal passages turns too thick, molecules from the air and food can't reach your olfactory receptor cells. Therefore, your brain receives no signal identifying the odor, and everything you eat seems to taste the same. With that being said, you can still feel the texture and temperature of the food, since this information is processed on the tongue.

The lack of taste may be accompanied by post-nasal drip, a condition where mucus drips down the back of the throat instead of out through the nostrils. Post-nasal drip is normally caused by an illness such as the cold, a flu virus or nasal allergies. All of these can wipe the flavor from tasty foods.

In short, the inability to taste anything when you have a cold is intimately related to all of the sniffling. Both tastes and smells are the perception of chemicals in the air or in the food we eat. But don't blame your taste buds for the loss of flavor. It's the fault of your stuffed-up nose.