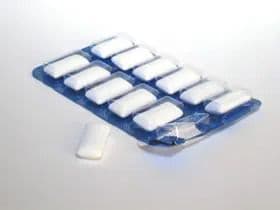 While many chewing gum brands guarantee fresher breath and sometimes even cleaner teeth, few products live up to this promise. For the most part, chewing gum may give halitosis-causing oral bacteria something to chew on themselves.

After you've eaten a meal, bacteria in your mouth begin to consume food particles on your tongue and between your teeth. As microbes make those particles decay, the bacteria themselves emit volatile sulfur compounds (VSCs), which smell very strongly.

Chewing gum accomplishes the same thing. The sugars, proteins and carbohydrates in a stick of regular gum give oral flora a malodor-causing meal. Even sugar-free gum leaves a film in the mouth for bacteria to live on.

The cinnamon, fruity or minty smell of gum merely covers up bad breath. The only exception to this rule seems to be specialty breath freshening gums that neutralize VSCs, thereby eliminating the compounds that give halitosis its odor.

However, these have not existed for more than a few decades, whereas chewing gum itself is a concept millennia old.

Ancient Greeks and Romans, including Marc Antony and Cleopatra, chewed fragrant waxes and resins intended to neutralize bad breath, according to the Sulphur Springs Country World.

The North Texas newspaper said that true chewing gum, as it is known today, was not invented until around the Battle of the Alamo, in 1836.

It reported that Mexican general Antonio de Santa Anna gave his soldiers "chicle," or wax taken from the sapodilla tree. Only when Santa Anna was exiled to Staten Island, New York three decades later did an American entrepreneur named Thomas Adams use this concoction to create "Chiclets," the first brand of chewing gum in the world.

Bad breath has been masked, but not blotted out, ever since.

That said, BBC News has reported that a British archaeologist recently discovered a much older lump of fossilized chewing gum in Finland. A small, gray wad of birch bark tar with tooth impression in it, it is an estimated 5,000 years old. It was probably chewed by a Neolithic human, though likely not to alleviate bad breath.

While reducing gum infections may dampen halitosis, unfortunately chewing birch bark is not very feasible today. Instead, individuals with bad breath should consider brushing more often and chewing a specialty breath freshening gum that neutralizes VSCs in the mouth.