Why Don't Babies Get Bad Breath Or Gum Disease? 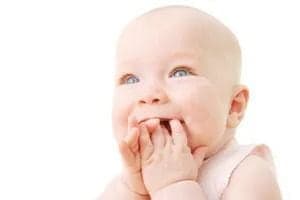 Newborn babies have a lot going for them. They're adorable, they're cuddly, they sleep quite a bit (hopefully), they need lots of attention and they don't seem to have almost any body odor at all. So why don't infants get bad breath or gum disease? What keeps them from developing these problems until they're older?

The young and the toothless

The simple answer is that babies do get halitosis and gingivitis, as well as other oral issues like thrush or even canker sores. They're just not as common for them as they are for us grown-ups.

You'd think that, with their all-dairy diet, newborns would be stinking up a storm and getting all sorts of gum infections. But this isn't really the case. Instead, it's usually foreign invaders that cause baby bad breath, according to BabyCenter.

If an infant has halitosis, it can be because they're ill, their mouth is dry or they have a small object lodged in their nose (really), the news source states. Baby gum disease also exists, due to the possibility of picking up pathogens on the tongue and lips (since babies love to chew or suck on anything that passes in front of their faces).

So what keeps their oral odor to a minimum?

Even with the small risk of baby halitosis and gingivitis, newborns and infants really do have better breath, all in all. Why? There are several possible reasons: