The Ionic ProClean Toothbrush - Tooth Brushing for the 21st Century!

Humans have been taking care of their teeth for thousands of years. Around 3500 BC, the ancient Babylonians were thought to have used the frayed ends of sticks to clean their teeth (OUCH!). In slightly more recent times, the first toothbrushes were thought to have been made by the Chinese, from the hair bristles of neck skin of cold weather pigs, with a bone or bamboo handle (a Bacon Flavored Toothbrush?)

During the 1700's, French Dentists were the first Europeans to advocate the practice of tooth brushing, but still the bristles were made from animal hair (usually pigs or horses).

It wasn't until the invention of Nylon that the first "modern" toothbrush finally appeared around the 1930's. Thirty years later, the first electric toothbrush appeared in the US.

Now, in 2016 — the NEXT Generation of Toothbrushes are finally here. Using Technology and Science, it's not just about scraping the plaque off your teeth anymore... Introducing The IONIC PROCLEAN TOOTHBRUSH — a TRIPLE THREAT to plaque.

Here's a quick science lesson: Have you ever heard the saying "Opposites Attract"? Well I'm not sure if this is true in relationships or not, but it's DEFINITLEY true when it comes to atoms. An atom with a NEGATIVE charge is attracted to an atom with a POSITIVE charge. (Think of magnets)... Conversely, 2 Negative atoms will repel each other (just like 2 POSITIVE atoms will also repel each other). 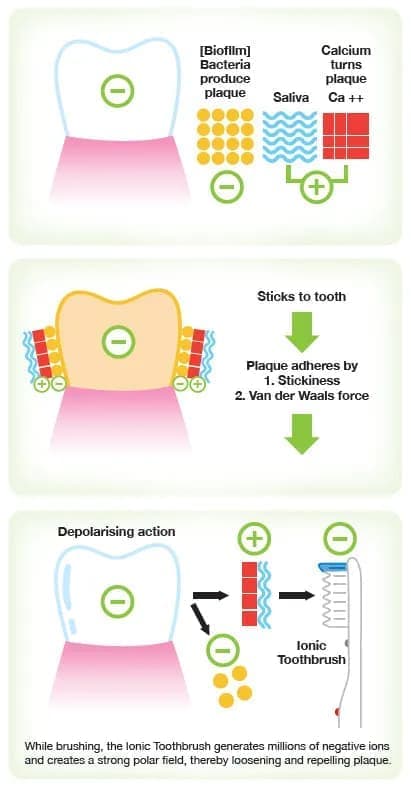 Got all that? Good, because now I'm going to relate it to your teeth...

Bacteria and their sticky by-products make up dental plaque, which is classified as a biofilm. Biofilm, bacteria, and teeth are all negatively charged. Logically, that means they repel each other...Not so fast... Your saliva contains POSITIVELY charged calcium ions and they blend into the plaque, masking the original NEGATIVE charges. Consequently, there is now an ionic attraction between the mixed plaque and your teeth. To make matters worse, extremely robust forces that work at microscopic distances (Van der Waals forces) take over, allowing the plaque to adhere and multiply on the tooth surface, creating thicker biofilms (plaque) which may eventually lead to tartar and periodontal problems.

But when you use an ionic toothbrush in your mouth, it sends out a stream of millions of negatively charged ions. This acts to create a strong polar field, thereby loosening and repelling plaque.

In effect, now you have a toothbrush that not only uses gentle mechanical action to remove plaque (by regular brushing with dentist-recommended soft nylon bristles), but also uses the laws of physics to REPEL the plaque from your teeth and ATTRACT the plaque to the bristles of your toothbrush.

The ancient Babylonians would have been amazed...

So how does it all work? Well it's simple — each Ionic ProClean toothbrush creates a virtual "circuit" while you brush. You can see that it's working when the light on the handle comes on — this means the circuit is active and plaque is quite literally "flying off your teeth". It's simple to do, (just make you're your finger is touching the contact on the handle while you brush), and takes no more time than using a regular toothbrush.

I've been using my ionic toothbrush now for about 3 months, and I am CONSTANTLY amazed at how clean my teeth feel. Quite literally, after just ONE brushing, your teeth will feel smoother and cleaner than they EVER HAVE from just using a regular toothbrush. And it won't just be YOU that notices the results, your dental hygienist will notice it, too. In dental practices that recommend Ionic Toothbrushes to their patients, virtually ALL the hygienists notice less plaque during regular, yearly cleanings.

Technology has come a long way over the years, so why not apply it to your tooth brushing as well. Pick up an Ionic ProClean Toothbrush today, and experience the difference for yourself.

Remember, "If the Light Is Glowing, the Ions are Flowing!"