The History and Science of Kissing and Bad Breath

A Brief History of Kissing 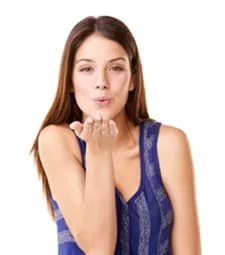 According to Wikipedia, a kiss is the pressing of one's lips against another person or an object. Cultural connotations of kissing vary widely. Depending on the culture and context, a kiss can express sentiments of love, passion, affection, respect, greeting, friendship, peace and good luck, among many others. In some situations a kiss is a ritual, formal or symbolic gesture indicating devotion, respect, or sacrament. The word came from Old English cyssan “to kiss”, in turn from coss (“a kiss”). The first written reference to kissing is in King Solomon’s Song of Songs: May he kiss me with the kisses of his mouth, for your love is better than wine. Other ancient texts, over 1500 years old from India refer to rubbing noses together and “mouth to mouth” kissing.

There are several theories as to how kissing became so common across so many cultures in all four corners of the planet. Some scientists believe that kissing is an instinctive act while a smaller group believe that it is derived from the act of “kiss feeding” which is a process used by some mothers to feed their infants food chewed by the mother and then passed into their baby’s mouth.

I would like to propose another theory passed on to me by an anthropologist who was a patient of mine in my San Francisco office. She theorized that in the physical state of kissing, the noses of both participants are intimately close to the mouth of the other. In the process of physically kissing with their lips, the kissers are also literally sniffing out the other person as part of a primal need to make sure the other person is “safe”.

The Science of Smelling

Smell is one of our basic senses. We are all familiar with the phrases such as “the smell of fear,” “the smell of success,” “I smell a rat,” and “Something smells fishy”. They all combine a real sense of smelling with life experiences. Safety most likely has its own odor.

My patient/anthropologist explained to me that our cave men ancestors used smell as a protective device. When our ancestors went out hunting for food (Kroger and Safeway were not yet around) and came across a sabre tooth tiger carcass, one would think that they would be thrilled that their hunt was over. No spearing, no stabbing, no bloody mess. They could immediately determine if the flesh of the dead animal was safe or unsafe to eat by simply smelling it. Meat which is in the process of rotting contains the chemicals cadaverine and putrescine. They are produced by anaerobic bacteria which take over the dead proteins of flesh. The by-products of this rotting process are Volatile Sulfur Compounds. Consequently, if the carcass stunk, it did not pass the smell test. Our ancestors knew from experience that if they took home that smelly carcass and the family ate it, they would either become violently ill or become extinct. Consequently, when we experience bad breath, our first natural reflex is to back off as our brain flashes “WARNING: DANGER!”.